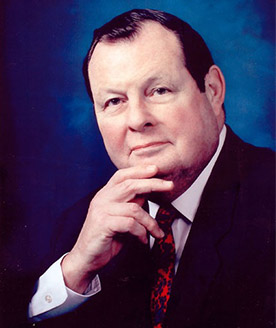 Harold C. Urschel, Jr., M.D., was Chairman of the Board for Mary Crowley Cancer Research from March 6, 2000 to November of 2012. He loved educating his colleagues on how to unlock the mysteries of diseases. He embraced the mission of Mary Crowley and led with passion to advance better options for cancer patients. He often explained that we have been using the same treatments of surgery, chemotherapy, and radiation for fifty years, which all “harm the host” (patient).  He believed Mary Crowley’s focus on immune and gene based investigational agents was transforming the cancer research field; exquisitely targeting the cancer cells without harming the patient.

Dr. Urschel taught extensively as professor of Cardiovascular and Thoracic Surgery at the University of Texas Southwestern Medical School in Dallas, Texas. He was visiting professor at a number of medical centers across the country and around the world. He was an honorary member of the Thoracic Surgery faculty of the Brigham and Women’s Hospital, Harvard Medical School, and the University of Toronto. He was the president of five major medical and surgical societies: the Society of Thoracic Surgeons, American College of Chest Physicians, International Academy of Chest Physicians, Southern Thoracic Surgical Association, and Texas Surgical Society. He also served on the Board of Directors of Electronic Data Systems from its inception until 1984.

As chairman of the Residency Review Committee for Cardio-Thoracic Surgery, Dr. Urschel established the standards for training heart surgeons across the nation. As a director and examiner on the American Board of Cardiovascular and Thoracic Surgery, he examined trainees before they entered clinical practice. Dr. Urschel was a founding member of the U.S. Heart Surgeons and has been recognized as one of the 100 best cardiac surgeons in the United States. He was the author of more than 400 scientific articles and multiple medical books.

Dr. Urschel was awarded honorary degrees as a Doctor of Laws and a Doctor of Science from The Ohio State University in Columbus, Ohio and Pikeville College in Pikeville, Kentucky.

He was past president of every notable professional organization in his field of thoracic surgery. But the anchor of his life was his devoted wife, Betsy, and their five children.

He made a difference.