"Mary Crowley has been soliciting novel Phase I and II immune therapeutics for its patients since 1997."

Structural (genomic) and non-structural (epigenomic) changes in DNA are the sine qua non of evolution. Cancer is an evolving process in which these changes (primarily mutations) enhance the fitness profile of a cell lineage in a way that confers an adaptation advantage in one or more environments. For example, this advantage may be an advantage in acquiring nutrients, in the rate of accessing blood supply, in increasing the speed of cell repair (even in the face of loss of accuracy), in adapting to hypoxic and/or acidic extracellular states, or in escaping immune surveillance. From birth to maturation, the growth and development process entails a higher rate of cell division (mitosis) and, insofar as mitosis is not error-free, a higher rate of accumulating mutations. After maturity, the organ-specific rate of mitosis and, consequently, mutation is linear. However, the risk of developing cancer does not significantly increase until later in life. 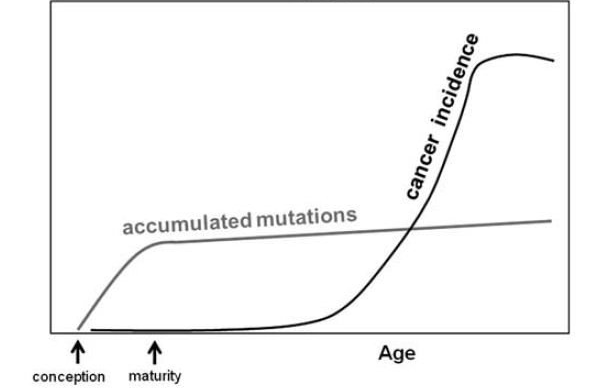 Figure 1: The relationship of the rate of mutations and risk of cancer with age.

This counterintuitive pattern is then not based on the rate of occurrence of oncogenic mutations but rather on altered selection criteria for these mutations (see figure 2).

The explanation involves the fact that the both the initiation and progression of a cancer require adaptation to the immune microenvironment. The cancer immunoediting concept has been advanced to account for the shifts in fitness profile (see figure 3). Immunoediting consists of three sequential phases: elimination, equilibrium, and escape. In the elimination phase, both innate and adaptive immunity work together to destroy developing tumors long before they become clinically apparent. However, if a rare cancer cell variant is not destroyed in the elimination phase, it may then enter the equilibrium phase, in which its outgrowth is prevented by adaptive, not innate, immunologic mechanisms. The immune interaction is one of containment in which the cancer is recognized as “not-self,” presumably as a result of new, somatic mutations (neoantigens), and an immune response achieves a balance resulting in dormancy. The majority of antigens presented by the cancer are shared with the patient’s normal cells and have been immunologically nullified as a result of “central tolerance”. In this phase, recognition of the neoantigen[s] (as well as some overexpressed and tumor-associated antigens) elicits enough of an immune response to produce a type of commensalism. The first two phases can last for years, even for an entire lifetime. But as a consequence of constant immune selection pressure placed on genetically unstable tumor cells held in equilibrium, tumor cell variants may emerge that (1) are no longer recognized by adaptive immunity (antigen loss variants or tumors cells that develop defects in antigen processing or presentation), (2) become insensitive to immune effector mechanisms, or (3) induce an immunosuppressive state within the tumor microenvironment. These tumor cells may then enter the escape phase and proceed to clinically apparent disease. 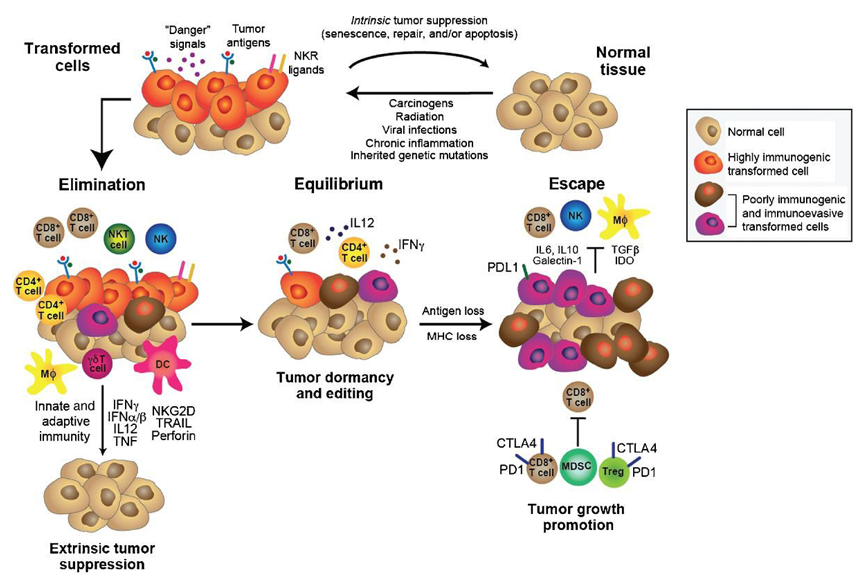 Given the life-long rate of accrual of somatic mutations—primarily non-functional synonymous (no change in the amino acid encoded by the mutated codon) mutations, followed in frequency by non-synonymous passenger mutations, and then by non-synonymous oncogenic driver mutations—it is not surprising that the number of potentially immunogenic neoantigens is rather small. Neoantigens are only occasionally present when the number of somatic mutations is less than 1.0 per megabase (<1/106 bases), regularly seen between 1 and 10 mutations per megabase, and frequently seen only when the number is greater than 10 mutations per megabase (see figure 4).

“Mary Crowley has been soliciting novel Phase I and II immune therapeutics for its patients since its founding, with a track record of having treated 268 patients with monoclonal antibodies, 343 with “immune-therapy” and comprising a significant proportion of the 179 patients treated with cellular therapies and the 231 patients treated with viral therapies.”

Neoantigens, which although immunogenic, still have to be processed (as epitopes) and recognized to be effective. Insofar as they are not subject to central processing and are tumor-specific, neoantigens are ideal targets for efficient adaptive immune activation and effective cancer-directed, immune attack. In one study evaluating the antigenic potency and effectiveness of cancer-specific mutations compared to their non-mutated wild-type counterparts, mice immunized in the footpad with the mutated peptides elicited no response (surface CD44 and intracellular IFNγ) in 76%, an anti-wild-type/cross-reactive response in 7%, and a cancer specific anti-mutation response in 17%; thus, 71% of the elicited responses were cancer specific. Following immunization with wild-type peptides, 89% elicited no response, 8% an anti-wild-type/cross-reactive response, and 3% a cancer specific anti-mutation response. Of the elicited responses, only 27% were cancer specific.

Mary Crowley has solicited novel Phase I and II immune therapeutics for its patients since its founding, with a track record of having treated 268 patients with monoclonal antibodies, 343 with “immune-therapy”, and comprising a significant proportion of the 179 patients treated with cellular therapies and the 231 patients treated with viral therapies. Some examples are:

Provenge (sipuleucel-T): derived from the patient’s own white blood cells and processed into APCs and then incubated with two elements: the tumor-associated antigen prostatic acid phosphatase (PAP) and GMCSF. Based on the results of a landmark study of patients with prostate cancer, Provenge became the first FDA approved immunotherapy for this indication. (Small EJ et al: (2006). Placebo-controlled phase III trial of immunologic therapy with sipuleucel_T (APC8015) in patients with metastatic, asymptomatic hormone refractory prostate cancer. J Clin Onol 24(19):3089-94).

T-VEC (talimogene laherparepvec; Imlygic): A gene-modified, immune-enhanced oncolytic (cancer killing) herpes simplex type I virus administered by intralesional injection to locally destroy cancer cells and induce an in situ immune response. The phase II study was designed by scientists from BioVex in collaboration with scientist-physicians at Mary Crowley and then implemented at Mary Crowley. This proceeded to become the first-in-class oncolytic immunotherapy approved by the FDA.

Vigil™: an autologous whole cell cancer vaccine transfected with a plasmid encoding both GMCSF and an innovative RNA interference moiety, bi-shRNA, targeting both the mRNA and protein translation of furin, which is the pro-protein convertase activator of both TGFβ1 and TGFβ2. The vaccine combines both the potent immunostimulatory capabilities of GMCSF with downregulation of both intrinsic immunosuppressive proteins TGFβ1 and TGFβ2. In comparison with Lucanix that resulted in ≥30% knockdown of TGFβ2, Vigil™ effects >90% knockdown. (Senzer N et al: (2012). Phase I trial of bi-shRNA(furin)/GMCSF DNA/autologous tumor cell vaccine in advanced cancer. Mol Ther 20(3):679-86). Of note, Vigil™ (previously called FANG) was conceived by physician-scientists at Mary Crowley and developed in collaboration with Gradalis, Inc.

The immune activating effect of Vigil™ has been confirmed: 30 of 31 patients with advanced ovarian cancer in clinical complete remission following primary therapy without evidence of circulating cytotoxic T-cell activation (ELISPOT test) prior to vaccination all converted to positive tests following vaccination. However, in order to further enhance Vigil™ effectiveness, Mary Crowley has initiated protocols combining Vigil™ with immune checkpoint inhibitors of the PD-1/PD-L1 axis. This combination is based on the premise that 1) Vigil™ will elicit an intratumoral infiltration of cytotoxic T-cells, a proportion of which, without a checkpoint inhibitor, would develop adaptive resistance by overexpressing PD-L1 and 2) the checkpoint inhibitor will enhance the cancer directed cytotoxicity of the activated T-cells by further eliminating T-cell exhaustion.