“A refinement of personalized medicine is not just hitting the patient’s cancer target, but knocking out its genomic/biomolecular core: BULLSEYE!” 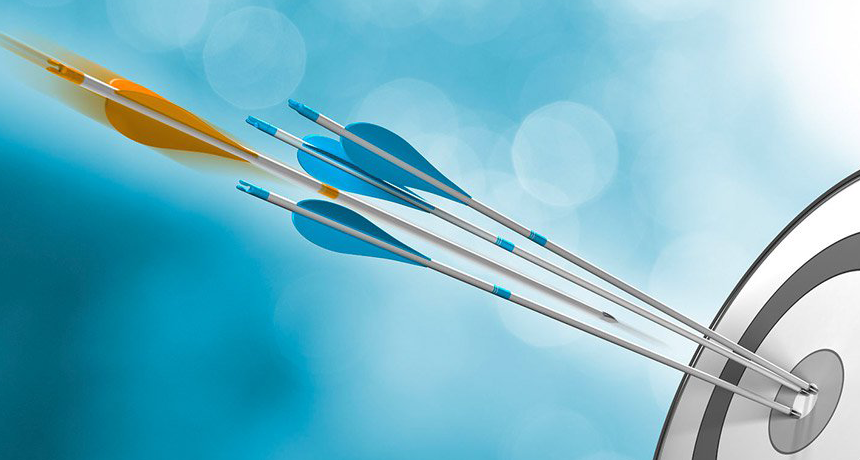 In a broad sense, however, the historical progression of advances in the treatment of cancer is, in actuality, a sequence of changes in our concept of “targeted therapy" into what we now characterize as “personalized medicine”. Consider that in the second century, the Greek physician, Galen—the highest medical authority for over a thousand years—described surgery as a potentially curative therapy for early cancer. Clearly, local surgical excision targets cancer spatially insofar as it attempts to limit damage done to normal tissues and thereby prevent collateral damage.

Within three years of Wilhelm Roentgen’s initial description of “x-rays” in 1896, radium was first used to treat cancer. Again, radiation therapy is also spatially focused and, therefore, like surgery is a targeted therapy. An obvious shortcoming of these spatially targeted therapies, despite technical and technological advances, is that curative therapy is limited to patients with early cancer with well-defined margins (allowing the surgeon to remove the cancer in its entirety; the radiation oncologist to encompass it) and without metastatic spread.

The breakthrough to systemic targeted therapy, i.e., the ability to therapeutically target cancer at multiple, wide-spread bodily sites while limiting damage to normal tissue, came in 1939 when Charles Huggins treated men with prostate cancer using hormones. For this achievement he was awarded the Nobel Prize.

Despite the devastating effects of mustard gas in World War I, the observation that exposure led to depletion of bone marrow and lymph nodes led to animal experimentation and, subsequently, the treatment of a patient with non-Hodgkin’s lymphoma with a mustard derivative in 1943. Interestingly, due to secrecy imposed during World War II, the results were not published until 1946.

Nitrogen mustard and the spate of subsequent chemotherapeutics are targeted to biochemical processes in cancer cells that are necessary for growth and proliferation. Unfortunately most, if not all, of these processes are also used by normal tissues, especially rapidly dividing ones like skin, bone marrow cells, and the lining of our intestines. In order to try to discriminate between normal and cancer tissues to minimize side effects, oncologists manipulate chemotherapy dose and schedule. However, at best this achieves a narrow therapeutic window—the small difference between the drug concentration that is effective against the cancer and the concentration that causes significant damage to normal tissues and, as a result, significant side effects to the patient.

The discovery in 1987 of the HER2 gene, led to the approval of the first “personalized” drug, trastuzumab (Herceptin) in 1998, an event which significantly widened the therapeutic window. Finally, completion of the genome project in 2003 and subsequent developments in gene sequencing now allows oncologists to direct their treatments against targets that are unique to cancer. Personalized medicine hypothesizes that:

The expansion of technologies, normalization of methodology across different laboratories, the decrease in turn-around time (i.e., the time from obtaining a biopsy to receiving the results), and the decrease in cost has transformed our understanding of the underlying mechanisms unique to cancers and has made practical the application of the resulting targeted therapies to each patient. For example, the chart below illustrates the shift over 40 years from treating lung cancer generically to being able to target an individual lung cancer specifically based on the knowledge of the driving mutation in a specific cancer. 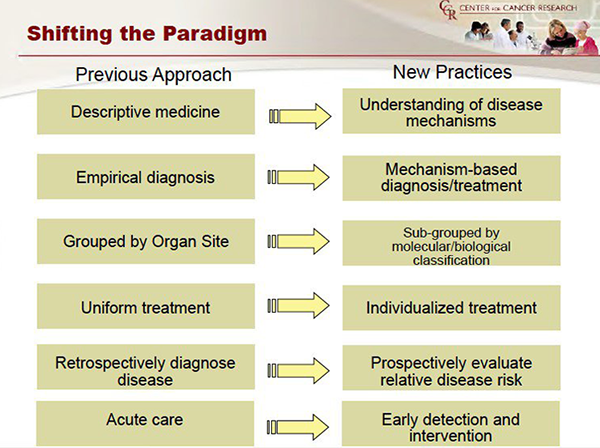