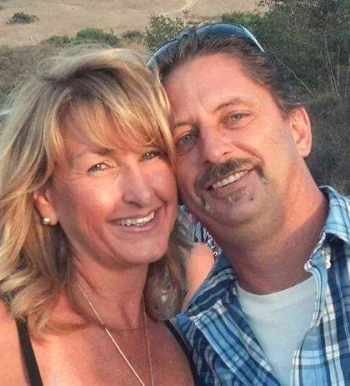 In 2008, Catherine Banach began experiencing phantom pains on her right side. She had a partial hysterectomy, removing fibroids that doctors believed were causing the discomfort, but her pain persisted. Years later, Catherine found herself in deep pain and unable to urinate. A visit to urgent care quickly turned into a visit to the hospital, and after 10 hours and a litany of tests, the doctor asked her, “Do you have an oncologist?” She was shocked. She had no family history of cancer.

Catherine had stage I ovarian cancer and tumors the size of a grapefruit in both ovaries. After surgery in January 2014, she went through six rounds of chemotherapy, resulting in a complete remission. Nearly five years to the date of her remission, Catherine began experiencing a new pain that wrapped around her stomach and sides. A CAT scan determined she needed surgery. As the surgeon reviewed her scans and information during a pre-op appointment, he apologized to her, his words still fresh in her mind: “I’m sorry, I can’t do surgery on you. You have cancer everywhere.” She was blindsided yet again.

Catherine saw her oncologist regularly, but due to her anemia, her protein levels rarely rose to an alarming level. This time, her cancer was stage IV and aggressive. She began the same chemotherapy regimen she received during her first bout with ovarian cancer, but it was too much. She flew to Mexico in search of treatments not currently available in the US, but the financial burden quickly became overwhelming.

When she returned to Texas, her oncologist offered an option closer to home: a clinical trial at Mary Crowley Cancer Research. “I was so excited,” Catherine said. “This was the answer to my prayer.”

She received an appointment quickly and was impressed by how thoroughly the staff explained every aspect of the available trials. Within a month, she enrolled on study #19-05. This targeted therapy is a phase Ib, first-in-human, dose-escalation and expansion study of XMT-1536 in patients with solid tumors likely to express NaPi2b. After just two treatments, Catherine’s tumor shrank by 1/3. She is quick to praise the staff, “With Mary Crowley, there is always someone available to talk to you and explain things to you. You have people on your side to help you get through this.”

Catherine is now focused on her recovery with a wonderful support system behind her. Originally from California, she speaks to her family there often and recently enjoyed a visit from her father. Catherine and her fiancé Dan moved to Texas in 2017 seeking respite, which they found on a “stress-free” property in Dangerfield with a lake, six dogs, and six chickens.

Catherine is approaching her future with a new outlook. “I might have cancer, but I can live with it, and I can live a long time with it.” People often ask her advice when it comes to cancer care, and she only wishes she could offer them the same experience she’s had. “I wish there was a Mary Crowley everywhere! I feel like they’re going to be the ones that will cure cancers. They’re giving people hope!”