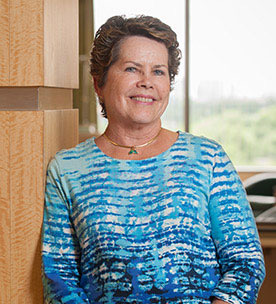 Connie’s cancer story began in June of 1999, but her gratitude to the physicians and staff at Mary Crowley Cancer Research continues today.  Her co-worker at the time may have done Connie a big favor when she contracted a respiratory problem that led to pneumonia. As a precaution, Connie decided to go to a doc-in-the-box for a chest X-ray to make sure the pneumonia had not been passed on to her. The doctor did not find pneumonia; however, he did find a suspicious mass on her right lung and suggested she see an oncologist. Living in Dallas at the time, she did so and a biopsy revealed the ultimate diagnosis of Stage IV lung cancer. Immediately her oncologist referred her to Mary Crowley without giving her any standard treatment.

Connie was placed on her first clinical research trial that included a chemotherapy component to stabilize her disease, followed by a second trial that did the same. By 2000, she was on her third clinical trial, which worked to reduce her cancer! The trial used a piece of her tumor tissue to construct a gene therapy to fight her cancer. She was very fortunate to have had little to no side effects. Connie said, “I never missed a day of work other than the times I had surgery.”

Unfortunately, Connie’s cancer progressed right after September 11, 2001. The right upper lobe of her lung had to be removed to eliminate the cancer. After her surgery, she was without evidence of cancer for years. Therefore, in 2003, she wanted to give back to Mary Crowley and volunteered to become a member of the organization’s Institutional Review Board (IRB). Coincidentally the Chairperson was the same oncologist that diagnosed her original cancer. As a lay member, she assisted in the review of consents for patients contemplating enrollment on a clinical trial at Mary Crowley. By then, she was very well qualified to put herself in the shoes of future patients as she had ‘been there and done that’ on several occasions.

Connie moved to Houston in 2007. On a routine check-up at Mary Crowley, a recurrence was detected and she was referred to MD Anderson Hospital for Proton Radiation for 28 days. It worked and she was back to enjoying life. During her time in Houston, Connie also volunteered at MD Anderson Hospital supporting cancer patients, especially those who were undergoing cancer lung surgery. It was during this time that Connie was asked to serve on a proposed State-Wide IRB, but after a period of time, the plan did not come to fruition.

Seven years later, in 2014, it was back to Dallas to live and face the third progression of her stage 3b cancer. Her third surgery to remove the right middle lobe of her lung took place in September of 2015, followed by radiation and a personalized immune therapy that was designed to stimulate her immune system to fight her cancer.

Cancer free since then, and 19 years after her initial diagnosis, Connie has become the face of gene and immune therapies by appearing on television shows to advocate for cancer patients and publicly speak about the benefits of clinical trials. Her contribution towards the advancement of new therapies for cancer patients is unparalleled due to her 15 years of service on the Mary Crowley IRB—the longest time for any member to serve.

After three progressions of her cancer, Connie feels as if her cancer has been treated as a chronic disease that has become successfully managed by the team at Mary Crowley. She says, “I will never leave Mary Crowley. The staff are like friends and knowing they are watching over me is a comfort and a blessing.”