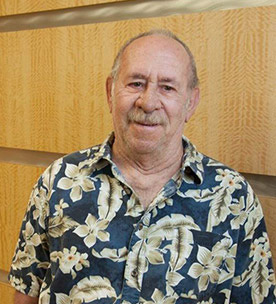 It was on Friday the 13th of December 2013 that Denis Schwanke learned about his cancer. Prior to this date he had noticed blood in his urine, and a biopsy confirmed a diagnosis of bladder cancer. He underwent seven months of chemotherapy under the care of his community oncologist before having his bladder and prostate surgically removed in August 2014. He was later referred to Mary Crowley in 2015 with evidence of cancer spreading to his spleen and lymph nodes surrounding his lungs. Denis enrolled on a Phase I targeted immune therapy clinical trial for five months that resulted in a 61% decrease of his tumors! One year later, in July 2016, he continues to have stable disease.

Denis always enjoyed his trade as a carpenter in Arizona before retiring and moving to Prosper, Texas, to be near his brother and nephew. A man of few words but with a dry sense of humor, he enjoys sports, particularly watching his nephew play baseball. Perhaps the love of his life is Mimo, his Maltese poodle, in addition to the staff at Mary Crowley. He could not say enough nice things about the care he received at Mary Crowley, noting his appreciation for the outstanding staff. He continues to drop by Mary Crowley for hugs which are abundantly given!