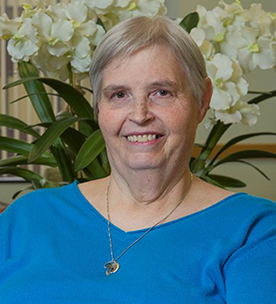 Donna has always been an overachiever. While working for a Medicaid subcontractor, her coworkers discovered Donna’s tenacity in overcoming challenges when she spent five years pursuing a case to make sure that it was resolved properly. Her determined nature has played an important role in her fight against cancer.

Donna is extremely grateful to her primary care physician for insisting she have a routine pap smear followed by a biopsy. In March 2012, these tests revealed she had uterine cancer. When preparing for a hysterectomy, Donna’s referral surgeon ordered routine pre-surgery scans. To his surprise, he saw a mass the size of a fist in her gallbladder area with an additional two inches adhered to her liver. The hysterectomy was put on hold until another surgeon could evaluate her and remove the gallbladder and liver masses. Oddly, Donna had experienced no prior symptoms. After gallbladder surgery, she received multiple rounds of chemotherapy from May 2012 to September 2012, in addition to cyber-knife radiation of her liver lesions.

In May 2013, Donna finally had the hysterectomy and was cancer free for over a year. However, in September 2014, an MRI showed a new mass near the gallbladder area. An additional round of chemotherapy initially worked but was not enough to completely rid her of her cancer. In July 2015, her primary oncologist referred her to Mary Crowley Cancer Research for evaluation. The Physician Investigator reviewed her molecular profile and matched her gene mutation to a corresponding agent in one of Mary Crowley’s personalized trials, and Donna enrolled on the trial in August 2015. By January 2016, her tumors had decreased by 25% and continued to decrease until her scans showed no visible disease in April 2016. Donna joked, “My cancer had vanished . . . but I have been told I am an overachiever!”

Donna continues on the targeted clinical trial, and her current dosage is down to one pill a day. Fatigue is the only significant side effect she has experienced. She is still able to care for her husband of 42 years, enjoy her grown son and play with her two grandchildren, ages six and thirteen. Donna is one happy patient who greatly appreciates the care she has received at Mary Crowley Cancer Research.