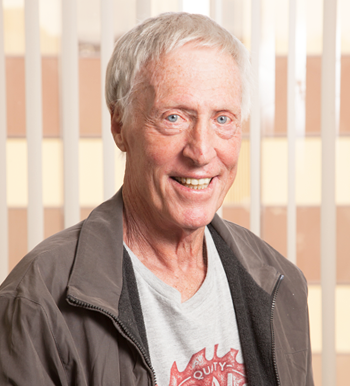 Jerry is 73 years old and a native Texan who grew up in Lubbock and made his way to North Texas approximately 30 years ago. He remembers, as a kid, helping his dad clean his auto repair shop before starting his career as a home builder in 1979. Not long ago, in April 2017, Jerry was experiencing a “bad cough.” Thinking it was a flu or cold, he made an appointment with his physician. After tests and a biopsy, he was diagnosed with Stage IV Mesothelioma, a form of lung cancer that affects the membrane surrounding one’s lungs. Mesothelioma is typically diagnosed in individuals who have been previously exposed to asbestos or such other similar toxic products, which may have been due to his time spent building homes. Nevertheless, Jerry says he has no regrets and that “life is what you make it!”

His oncologist treated Jerry with chemotherapy before referring him to Mary Crowley in August 2018. He is currently enrolled in a clinical trial that contains a targeted therapy designed to inhibit FGRF plus an immunotherapy. After only a few treatments, Jerry’s cancer has reduced by 30.4%! He said that "you cannot find better people anywhere” than the staff at Mary Crowley.

With his characteristically positive attitude, Jerry said his cancer has not affected his lifestyle, and he is still pursuing his passion for golf, keeping active and telling people about the word of God. Approximately 20 years ago, Jerry built a gymnasium in the Eagle’s Nest Cathedral in Dallas, where for six years he served as a Youth Minister. Jerry would bus kids from South Dallas to play basketball and then talk to them about God. Jerry currently lives in Arlington and is extremely proud of his daughter and two grandchildren, Ava, who is 12 years of age, and Tess, who is five. He also looks forward to building his own home in the coming months. Jerry brings his infectious positivity to Mary Crowley at every appointment!