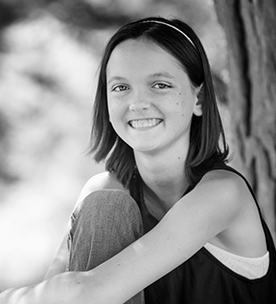 It all started when Jessica began experiencing pain in her lower back at age 13. Her physician initially diagnosed her with bronchitis and possible growing pains. When the pain became severe, her family rushed her to the emergency room thinking her bronchitis had progressed to pneumonia. It was there on December 24th, 2013, they learned that Jessica had Stage IV Ewing sarcoma with a tumor the size of a basketball wrapped across her chest, blocking 80% of her airway.  The physician told the family that if they did not start chemo right away, Jessica would probably not make it through the week; with treatment, she only had 2-6 months to live.

After receiving emergency chemotherapy, Jessica began the standard front-line regimen of chemotherapy for four months to shrink her tumor.  It was during this time that her family began doing their own research on the Internet; and found Mary Crowley's Phase 1 immunotherapy vaccine trial for Ewing sarcoma.  Once Jessica completed her front-line treatment in the summer of 2014, the family drove from Georgia to Dallas for a consultation with Mary Crowley, successfully enrolling Jessica on the trial.  It was there she had surgery to remove her tumor, and a portion of the tissue was used to manufacture a personalized  vaccine. The vaccine was then stored for later use, as Jessica needed to have additional chemotherapy and radiation to rid her body of as many cancer cells as possible.

Her stepmother was to begin military training in Texas; the family also wanted Jessica to move to Texas to receive proton therapy, which was unavailable in Georgia. However due to the short assignment, the military would not pay for the family to move to Texas, so Jessica’s Dad spent his retirement savings so Jessica could receive treatment and the family could be together. Unfortunately Jessica was diagnosed with pneumonia while receiving this treatment. She recuperated, and the family moved to Seattle, Washington for the next military assignment.  One month later, Jessica was diagnosed again with pneumonia and was in a coma for three months. Thanks to the excellent care she received on this military base, Jessica miraculously pulled through and after a week of rehabilitation was feeling well.

In February 2015, Jessica came back to Mary Crowley to receive her first of six vaccines that was given monthly.  This immunotherapy is designed to educate and boost the immune system to fight the return of any cancer.   On April 8, 2015, Jessica’s scans showed that she was CANCER FREE!

Overcoming this series challenges, the family considers Jessica their miracle! Jessica finished her 7th grade year with stellar grades, at the top of her class.  She is also secretary of her class and enjoys playing the violin.  Her goal is to attend SMU and become a lawyer.  Everyone is cheering her on!

See the video about Jessica