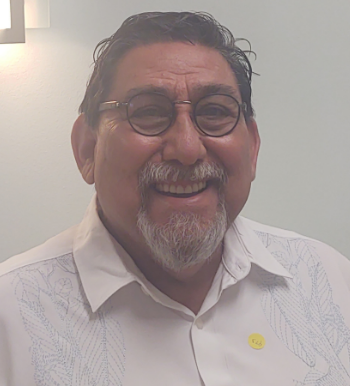 Jose Perez is a man whose life is guided by Jesus Christ. He was a faithful employee of TXU Energy for the last fourteen years, but before that, he worked as an ordained minister with the Assemblies of God Church for 35 years. In their spare time, Jose and his wife, Yolanda, traveled around the country ministering to people and conducting bible study classes. He was an avid golfer, and when he was not preaching, he was on the links. Then 18 months ago, Jose was diagnosed with Stage IV lung cancer that had metastasized to his lymph nodes, pelvis, and a cancerous lesion on his spine. Fortunately, for Jose, his doctor was Jairo Olivares who, in addition to seeing patients in his practice, also works at Mary Crowley Cancer Research.

Following months of chemotherapy, immunotherapy, and radiation treatments, the cancer in his lymph nodes was eradicated, and the lesion on his spine went dormant. The tumors in his lung and pelvic cancer shrunk 40%, but the side effects of the treatments were harsh. Jose was bloated, weak and he lost his hair. Unfortunately, after three months Jose’s tumors began to grow again. Dr. Olivares was familiar with trial 19-09 at Mary Crowley that was testing a new immunotherapy drug and referred Jose to see if he qualified.

Jose came to Mary Crowley for a screening, and within two weeks, he enrolled. He began treatments of CTX-471, a drug that stimulates the immune system to attack cancer cells. The treatments helped prevent his cancer from metastasizing and shrank his lung tumor. In December, after three months of treatment, his tumor had reduced by 15%, with minimal side effects. His most recent scan in March 2021 showed his tumor had shrunk an additional 15%, again with minimal side effects.

Jose Perez faced cancer with seemingly inexhaustible energy and optimism. He credits his faith, his wonderful wife, Yolanda, and their blended family for giving him the strength to fight. Jose expressed his gratitude to Dr. Olivares and all of the nurses at Mary Crowley saying, “I thank God every day for Mary Crowley Cancer Research. The doctors, the nurses, the staff, all of them have been so wonderful to me.”

He is still on the trial and his life is starting to get back to normal. He and Yolanda have started traveling around the country again, ministering to people. He retired from TXU Energy so he has time to conduct Bible study through Zoom meetings. He is blessed with six children, 17 grandchildren, and 4 great-grandchildren who they visit as often as they can.

He does have one more goal in mind. “I have not been able to play golf because of pain in my pelvis”, he says, “I want to get back playing regularly. I’m 66 now and I want to shoot my age.”