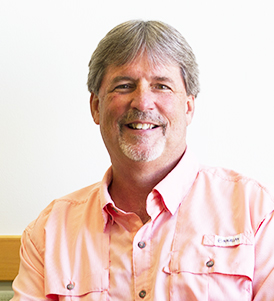 “Where do we go from here?” Kris Southward asked this question five years ago, as he began his journey with stage IV colon cancer. The future looked bleak.

A CPA in Abilene, TX, Kris was accustomed to extra pressure during tax season. In May 2012, at the age of 49, he attributed his nagging stomach pain to stress. But the pain persisted into summer, and Kris scheduled a routine colonoscopy. To his shock, he awoke from the procedure to hear the doctor say, “I am sorry, you have cancer.” Later a biopsy revealed the cancer had spread to his liver.

Kris’ oncologist offered grim statistics: most patients with advanced colon cancer do not survive five years; with surgery and chemo, two year survival was the best expected outcome. That prognosis was staggering to Kris, who envisioned more time with his wife Karen, their three daughters and his one-year old grandson Ryder. His oncologist recommended a clinical trial at Mary Crowley Cancer Research, to offer Kris as many weapons as possible in his arsenal to fight the cancer.

Kris came to Mary Crowley and discovered that he qualified for a first-in-human combination chemo-immune therapy trial that consisted of a personalized immunotherapy that is designed to engage one’s immune system to recognize and fight the cancer. While there was no guarantee of success, Kris was relieved to have a glimmer of HOPE.

From November 2012 until May 2013, Kris received doses of chemotherapy twice a month. In addition, from November 2012 until September 2013, he received a monthly dose of his vaccine made from his own tumor tissue. He continued going to appointments with his primary oncologist, and he consistently felt well enough to work a normal schedule—even through tax season.

“It gave me tremendous HOPE that Mary Crowley would take me as a patient… Everyone was genuine, up-front, and positive; I always felt welcome,” Kris says. In addition to seeking a positive outcome for himself, Kris felt good about participating in a trial to help other cancer patients find alternatives to harsh chemotherapy.

Kris’ cancer responded to the treatment, and year after year his scans remained clear. At his five-year check-up in July 2017, Kris received great news: he is still CANCER-FREE. Kris reflects, “In many ways five years have flown by. I have been blessed tremendously by so many people, and am grateful to God for giving me these extra years… I am so grateful to everyone at Mary Crowley for all they did for me!”

Now when Kris asks “Where do we go from here?” the future looks bright indeed.