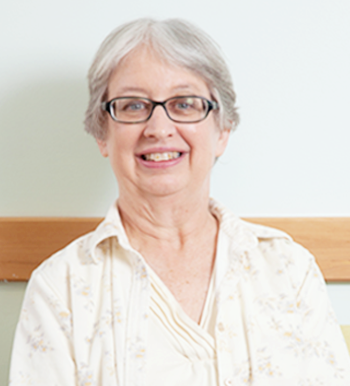 Lisa Black is a 58-year-old woman with a spirit beyond belief!  In September 2012, she noticed a great deal of unusual bleeding and went straight to her gynecologist. Sure enough, there was a cyst on her right ovary, and she was diagnosed with ovarian cancer. She had a hysterectomy and then underwent three rounds of chemotherapy. She had regular scans every three months and seemed to be doing somewhat better.

But in January of 2014, the cancer reared its ugly head and reoccurred. She went through debulking surgery that August. Seventy percent of the tumor was removed, followed by six more months of chemotherapy treatment. Additional scans were taken every six months, and things seemed to be going well for Lisa.

In December 2017, however, the cancer reappeared. She did her own research this time and learned about Mary Crowley Cancer Research the following March and scheduled a consultation. Since coming to Mary Crowley, Lisa has enrolled on two clinical trials this year and is in hopes of improving results. Her first trial was with a potent small molecule compound designed to inhibit primary tumor growth and metastatic spread. Her second and current clinical trial involves a combination of chemotherapy with a small molecule compound that is designed to trigger cancer cell death by disrupting cell transport mechanisms which cancer cells depend on for survival more than normal cells. Lisa’s cancer is characterized as stable. If her spirit has anything to do with her recovery, she will definitely fight her cancer with everything she has.

Lisa said her experience with the staff at Mary Crowley has been great. She says, “Everyone is always positive and truly singularly focused on the patient.”

Lisa is married and has two grown sons, 34 and 31. She has lived in Allen for most of her life. She assists her CPA husband in his business and enjoys cross-stitching in her free time. She also sings in the Allen Symphony Chorus and her church choir. Lisa and her husband are active members of The Gideons International.