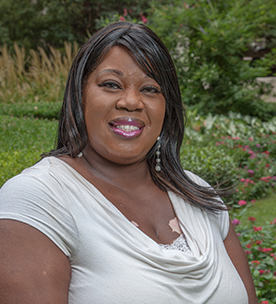 It all started in 2004 with a small mole on the heel of Patricia’s foot, that over the next three years grew to a 4” x 3” tumor.  Patricia was a busy lady.  She was living in San Antonio, working full-time, and going to school part-time.  One day the tumor bursts, requiring her to seek medical attention.  On January 14, 2008, Patricia learned from her physician that she had Stage III-B melanoma and to expect a 6 -12-month survival.   Over the course of that year, Patricia underwent five surgeries to remove numerous tumors throughout her leg.  She started chemotherapy treatment in November 2008 for three months which caused her to have severe depression.

By July 2009, more tumors had appeared, her physician recommended a nine-hour lymph perfusion surgery followed by a clinical trial with an oral chemotherapy.  Soon after the lymph perfusion surgery, it was discovered that the cancer had spread to her abdomen and right arm.  She had two more surgeries including reconstruction surgery and another melanoma treatment regimen.

The tumors kept returning so her physicians thought it was time for her to consider a clinical trial, and she was enrolled in several immunotherapy trials in San Antonio. The first trials were unsuccessful; however, the trial she is on now has been effective.  In August 2014, her husband was transferred to Dallas, and fortunately Patricia was able to enroll in the same immunotherapy trial at Mary Crowley in Dallas.

Patricia has only two tumors remaining, and the current immunotherapy appears to be shrinking these tumors. The trial requires Patricia to receive treatment every two weeks; due to the nature of the therapy, she cannot drive immediately thereafter, forcing her to hire a driver to pick her up from the clinic and take her back home.  To cover her transportation and additional medication costs, Patricia receives support from the Mary Crowley’s Benevolence Program that help offset these hardship expenses.

Patricia says, “Mary Crowley has been wonderful to me.  Their caring and loving support has been a blessing.  When the physicians said NO, in 2008, God said YES.” She gives God the credit for these last eight years.   Only 0.01% of African Americans are diagnosed with melanoma, and the statistical survival rate is five years.  After 23 surgeries and many treatment options, Patricia has beaten both of these statistics!