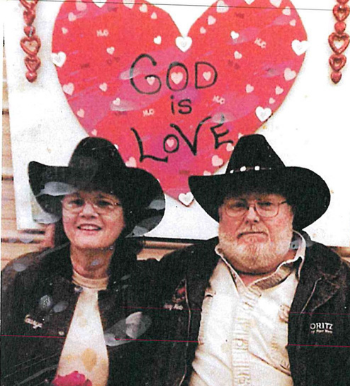 In 2016, Rockey Weddel was enjoying a countryside lifestyle in East Texas. His job as a cross-country truck driver kept him busy when he was away from the cows, horses, chickens, and his beloved wife of 43 years, Maurya.

After a routine checkup, he got a call that would change everything. “I went in for a regular doctor’s visit, went back to work, and they called me one day and told me to get to the emergency room,” he recalls. When the doctor called later that night to ask if he had been to the emergency room, he said, “Nope, gotta talk to the wife.” His wife gave him two choices: Either she would take him, or she would be calling an ambulance. Rockey felt fine but agreed to go, and within 10 minutes, they were sending him for treatment in Tyler as his kidneys had shut-down and he didn’t know it. He was diagnosed with prostate cancer.

Rockey was admitted and spent 20 days in the hospital, after which he began chemotherapy. At one point during his second round of chemo, they couldn’t find a pulse, and his blood pressure dropped dangerously low. “I was feeling fine and fixin’ to go back to work,” he remembers, but they immediately sent him back to the hospital for another 20-day stay.

After he was released and completed another round of chemo, life began to return to normal. However, two years later, the cancer recurred. Due to his original reaction to it, the doctors did not want to pursue the same regimen as before, “the chemo was just hard on me.” His doctors had a new plan, a referral to Mary Crowley Cancer Research to begin a clinical trial.

Rockey started trial #19-26, a phase 1b combination trial. While he had initial success, the team at Mary Crowley is continually identifying trials that may work for patients if their results begin to change which is exactly what Rockey experienced. He is now on trial #19-32, a targeted therapy for patients with advanced prostate cancer. He is doing very well and appreciating the reduced side effects of the treatment, saying, “this is a whole lot better than chemo ever thought about being.”

Rockey has been grateful for his experience at Mary Crowley and has built a close bond with the staff. “The nurses and everyone here are awesome. They take good care of me." Although he is no longer able to continue working as a truck driver, as he needs to stay home for treatment, Rockey is especially thankful that the team at Mary Crowley helped him navigate his disability and social security benefits, bringing peace of mind to an often complicated process.

Rockey is now able to get back to his favorite things like spending time with his wife and two daughters, and fishing with his grandson. He’s also very involved with his cowboy church, where he often participates in community outreach. Part of his ministry includes bringing his horse-drawn chuck wagon to various locations and cooking in his dutch oven.