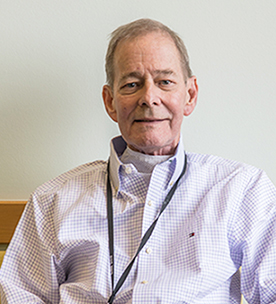 After teaching 22 years in the Dallas Independent School District, William (Bill) Lish was enjoying retirement. In September 2013, he went to his primary care physician with breathing problems. He had suffered from chronic respiratory issues over the years, and he thought he was going to a routine visit to get the usual breathing treatment.

After the initial examination, his physician rushed him to the Emergency Room. Bill passed out and woke up in the ICU with tubes all over his body and a breathing tube in his chest. Bill was diagnosed with stage IV cancer of the larynx. Doctors had to remove his larynx and thyroid gland. He also had a tracheotomy, a surgical procedure in which an incision is made in the neck to open a direct airway in the trachea, or windpipe, which allows the patient to breathe.

Bill underwent rounds of chemotherapy and radiation and was in remission for three years. Living with the tracheotomy and feeding tube became his “new normal.”

In June 2015 the cancer returned with tumors in his lungs.  After another round of chemotherapy, the doctor delivered bad news: chemotherapy was not working, and there were no other options. Patients with recurrent metastatic cancer like Bill’s usually live two to six months. But Bill was not willing to accept this prognosis and said “I am not ready to die.”  His oncologist referred him to Mary Crowley Cancer Research. After consulting at Mary Crowley in March 2016, Bill was enrolled onto an immunotherapy clinical trial. This particular trial combines an IDO inhibitor with a PDL-1 inhibitor to engage the immune system to fight the cancer. There was no guarantee that the trial would work, but it gave Bill HOPE.

As of September 2017, approximately eighteen months after he was expected to live less than six months, Bill is still participating in the clinical trial and his latest scan showed that the tumor in his lung has shrunk by 80%. Bill feels good and has gained weight, a very positive development. “I have received excellent care at Mary Crowley. I trust them and know they have done everything they told me they would do.  They are like family to me!”

Although he is retired from the teaching profession, Bill continues to teach all of us important lessons about courage, perseverance and HOPE.