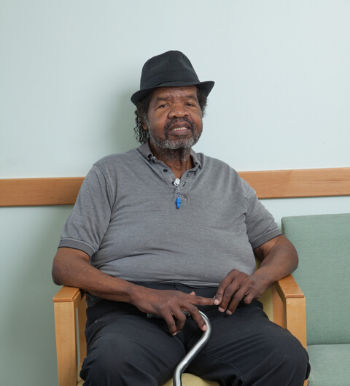 As the New Year begins, we find ourselves seeking inspiration to start on a positive note. Look no further than Henry Williams. A native of Dallas, Henry is an active member of his family and a devoted husband to Alma, his wife of over 55 years.

Both Henry and his wife Alma had overcome medical issues in the past but were doing well when Henry began experiencing bouts of lightheadedness. He brushed them off initially, attributing them to low blood sugar. After a more severe reaction on May 3, 2018, he decided it was time to go to the emergency room. The team there ran tests and diagnosed him that day with lung cancer. “It came as a shock,” he remembers.

After a two-week hospital stay, Henry began standard of care treatments at Baylor. Chemotherapy and radiation had him at the hospital nearly every day and, while the original tumor was shrinking, there were two additional lesions that had his doctor’s attention.

Henry’s oncologist, Dr. Konduri, knew of a trial at Mary Crowley that he thought would suit him and the referral process moved swiftly. “Within about two weeks, I was on a trial.” Henry has since been on trial 17-37 which is a combination of 2 drugs. One is an immunotherapy approved by the FDA, and the other is an investigational drug targeting CD73 on the tumor.

Within just three months, his tumor had shrunk by 15%! Henry’s wife Alma recalls the news, “I cried. We’re just so thankful and so grateful for Mary Crowley!” Henry and Alma are now looking forward to the future and a return to the active lifestyle he treasures, including spending time with their many nieces and nephews, working on home projects, and playing dominoes and pool.

When asked about his experience at Mary Crowley, Henry is effusive. “Everyone here is so nice. This was a real blow to me, but they are giving me HOPE!”