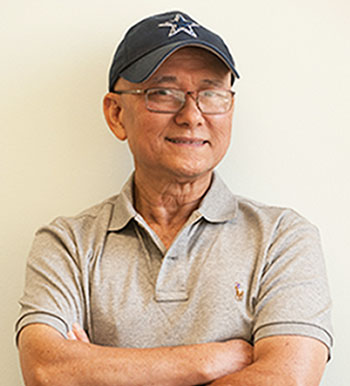 Hung Nguyen is a proud North Texan. He cheers for both the Dallas Cowboys and the Dallas Mavericks, and he enjoys watching the games with his daughters. Born in Vietnam, Mr. Nguyen served as a soldier in the military. His strength was tested when he was the victim of a rocket blast that broke both legs. He says the difficult recovery from the explosion taught him perseverance that he would later draw upon for an even tougher battle.

In 1989, at age 37, Mr. Nguyen followed his sister to the United States. He and his family settled in North Texas, and he found a job producing medical equipment. Ten years later, he began experiencing pain in his right shoulder but shrugged it off as a result of his occupation. He treated himself with over-the-counter pain relievers for two years. Finally, when the pain became unbearable, he went to the doctor.

To his surprise, he was diagnosed with Stage IV thymus cancer that had spread to his lungs and heart. The thymus is a small organ located just behind the breast bone in the front part of the chest and is an important part of the body’s immune system. Mr. Nguyen underwent surgery to remove a tumor the size of a fist, then chemo and radiation. Unfortunately, within one year the tumor grew back. Radiation was no longer an option, and chemotherapy had done nothing to stop the tumor’s rapid growth. That’s when Mr. Nguyen’s oncologist recommended Mary Crowley Cancer Research.

With few other options, Mr. Nguyen and his family felt that a clinical trial was his best HOPE. In September 2013 he enrolled on a targeted small molecule trial at Mary Crowley. Instead of feeling overwhelmed with exhaustion and nausea, he felt well enough to drive himself to appointments. Mr. Nguyen’s cancer responded well to the therapy, and his tumor began to shrink. But then he faced a new challenge: the pharmaceutical company decided to close his clinical trial, which meant he would no longer receive life-saving doses of the trial medication. Mary Crowley staff persuaded the company to allow Mr. Nguyen to continue receiving the therapy, while covering other costs associated with his care. Thanks to those efforts, he never missed a dose.

In November 2016, Mr. Nguyen completed just over three years on the trial. Eight months later, he and his daughters were delighted to learn that his latest scan showed NO VISIBLE SIGN OF CANCER. Mr. Nguyen says Mary Crowley physician investigators and staff gave him great encouragement in his fight against cancer. “I like coming to Mary Crowley. Everyone here is very nice and welcoming.” In addition to the successful therapy, he says Mary Crowley provided HOPE when he needed it: “Hy vong song o day,” he says in Vietnamese. “HOPE lives here.”