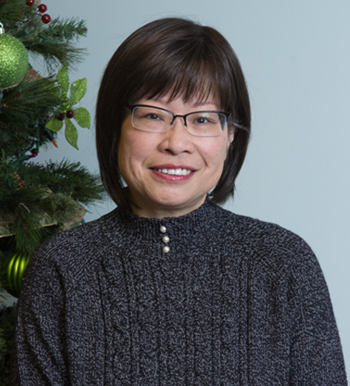 Rachel Cheung is from Hong Kong, where she first met her husband while working together at the same company. They moved to North Texas 20 years ago when her husband was transferred for work. Today, Rachel is 58 years old and filled with such a vibrant and positive spirit, which emanates through her church volunteer work.

Her cancer story began when she experienced problems with her menstrual period at age 44. Two years later, her physician recommended she have a hysterectomy. Upon removal of her uterus, the pathology report showed her uterine tissue contained a smooth muscle tumor called Leiomyosarcoma. Her physician said she required no additional treatment at that time, as the tumor around the uterus had been removed.

Ten years later, in 2012, a re-occurrence of her cancer appeared. Rachel’s physician discovered a lesion in Rachel’s right lung and also found a mass in her left breast. She began treatment with chemotherapy, followed by surgery to remove part of her right lung and a portion of her left breast. Both lesions were determined to be Leiomyosarcoma that originated from her uterine cancer. Following her surgery, Rachel continued with chemotherapy and radiation as her standard of care.

Things seemed to be going in a positive direction until 2016, when her oncologist found a lump in her lower back/gluteal area. It was three centimeters in size and removed by surgery, but, in December of that year, her oncologist once again discovered spots in her lung. At this point she travelled to San Antonio for treatment, but after experiencing several side effects, she stopped those treatments and began a combination treatment of Keytruda (an FDA-approved targeted therapy), chemotherapy, and monitoring.

In March of 2018, Rachel’s oncologist saw that her cancer had begun to grow. Rachel was referred to Mary Crowley Cancer Research in August and enrolled on a gene-targeted clinical trial designed to combat her BRACA 2 gene mutation. After her first therapy, she experienced fever of 103 degrees, chills and a low blood count, but after the dosage was adjusted, she is now stable and doing much better. And what a great Christmas present she received this year—her last two CT scans showed a 40-43% decrease in her cancer growth! Rachel is continuing with her clinical trial.

When asked about her experience at Mary Crowley, she says everyone at the clinic has treated her with such compassion and respect. Rachel said that she “feels the love of the staff” and she “loves them right back.”

Rachel and her husband live in McKinney and have two sons, ages 30 and 23. They also have two grandchildren – one two-year-old boy and a five-year-old girl. Rachel is an inspiration to us all and exudes the Mary Crowley tagline – “Hope Lives Here!”